Hey everyone! As the snow melts outside and the flowers start to bloom, it's become apparent that the eggs have shown up again this year, and they're back with a vengeance. Yes, the Eggpocalypse is at hand. Two champions shall rise above the rest to save us all from the eggs. They will be The Grand Eggmiral. But how do we find these two magical individuals? Well, it's quite simple! We host a tournament! THE TOUR D'EGG!!!

So, what is the Tour d'Egg?
Well, for those of you that weren't around last year, this tournament is a high-octane, no holds barred, head to head showdown to search for eggs against another team! Here's how it works!

You and another team will be dropped into an egg hunting arena. There may be eggs hidden in every nook, cranny and crevasse in the area. It's a race against the other team to find eggs! The winner is determined by the team that finds all of the eggs in the area first, or if neither team finds all of the eggs first, the winner is determined by the team with the most eggs after 60 minutes. Later rounds may have a longer time limit.

1. Synchronous Play - You and another team can start your match at any time. I don't need to be there!
Tie Breaks: Ties will be broken in overtime. The team that finds the next egg wins.
2. Asynchronous Play - You can run a match without the other team being present. This will record your time and egg total, and after the second team has finished their match it will produce a winner based on who found the most eggs the fastest. This has been added to enable people to compete as easily as possible. I ask you to only use this mode of play if there ends up being no other option, as it will be less fun to play matches asynchronously than it will be to play them synchronously. When using this mode, please continue playing until the game tells you the match is over, even if that goes for longer than 60 minutes. This is due to some technical limitations that are present.
Tie Breaks: Ties will be determined by the team that found their last egg soonest.

The tournament bracket will be divided by region, as best I can manage it. This is to allow you to schedule things as feasibly as possible.

Who can participate?
Anyone! Anyone can sign up for the tournament, regardless of rank. Teams are comprised of two players, and you are able to sign up as a team. Please ensure both members of your team sign up for the tournament. You are allowed to sign up as an individual with no team member chosen yet, and if you sign up as an individual you will be placed in a team with another player that signed up as an individual. By signing up for the tournament, you are committing to the following:
-You will be available to play, at minimum, three one-hour matches by April 4th.
Failure to do so will result in you being blacklisted from the other parts of this event and from any events I run in the future. This is harsh, but because failing to reach your commitment directly affects other people's capacity to enjoy the event, I find it necessary. Because of the asynchronous option, this should be very doable.

Anything else to add?
If you so choose to, you are welcome to record tournament matches and post them to wherever you want to. However, I ask that you only upload matches after the round you recorded them in has finished completely I.E. don't post group stage matches until the group stage is done.

Rules of the Tour d'Egg:
1. Be kind to each other. This event should, above all else, be fun! Toxic competitiveness will not be tolerated.
2. Do not collaborate with other teams. This creates an uneven playing field.
2. Do not circumvent the rules and gameplay of the event. If you find a bug, report it and don't abuse it. Getting any sort of unfair advantage makes the tournament unfair and unfun, and this will be met with disqualification. This includes searching Zero and trying to find tournament areas before you play, as this is not meant to be a "How well do you know our world map?" test or anything of that sort.

Tournament Signup:
You can sign up using this form! 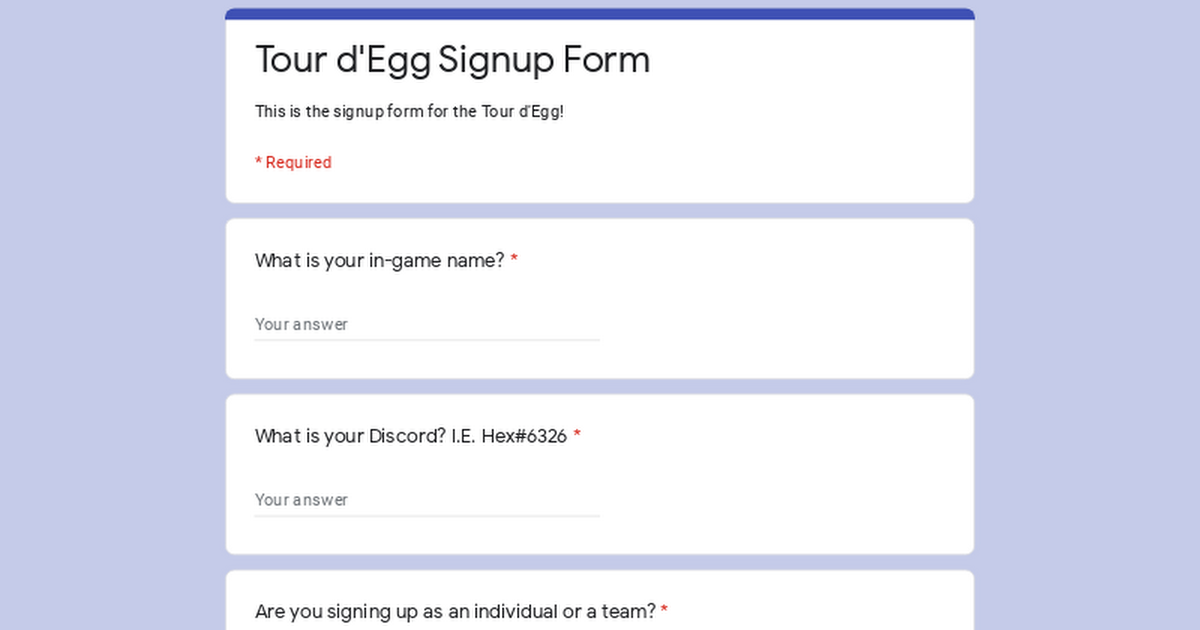 This is the signup form for the Tour d'Egg!

forms.gle
After you have, you will be sent a Discord invite for the server where the tournament is being organized.
The tournament will be starting in about a week, and the entire tournament will take about a month, with the group stage taking about 2 weeks. The timeframe is designed to be flexible to allow for maximum participation.
SIGNUPS ARE CLOSED. Thanks to everyone that has signed up! 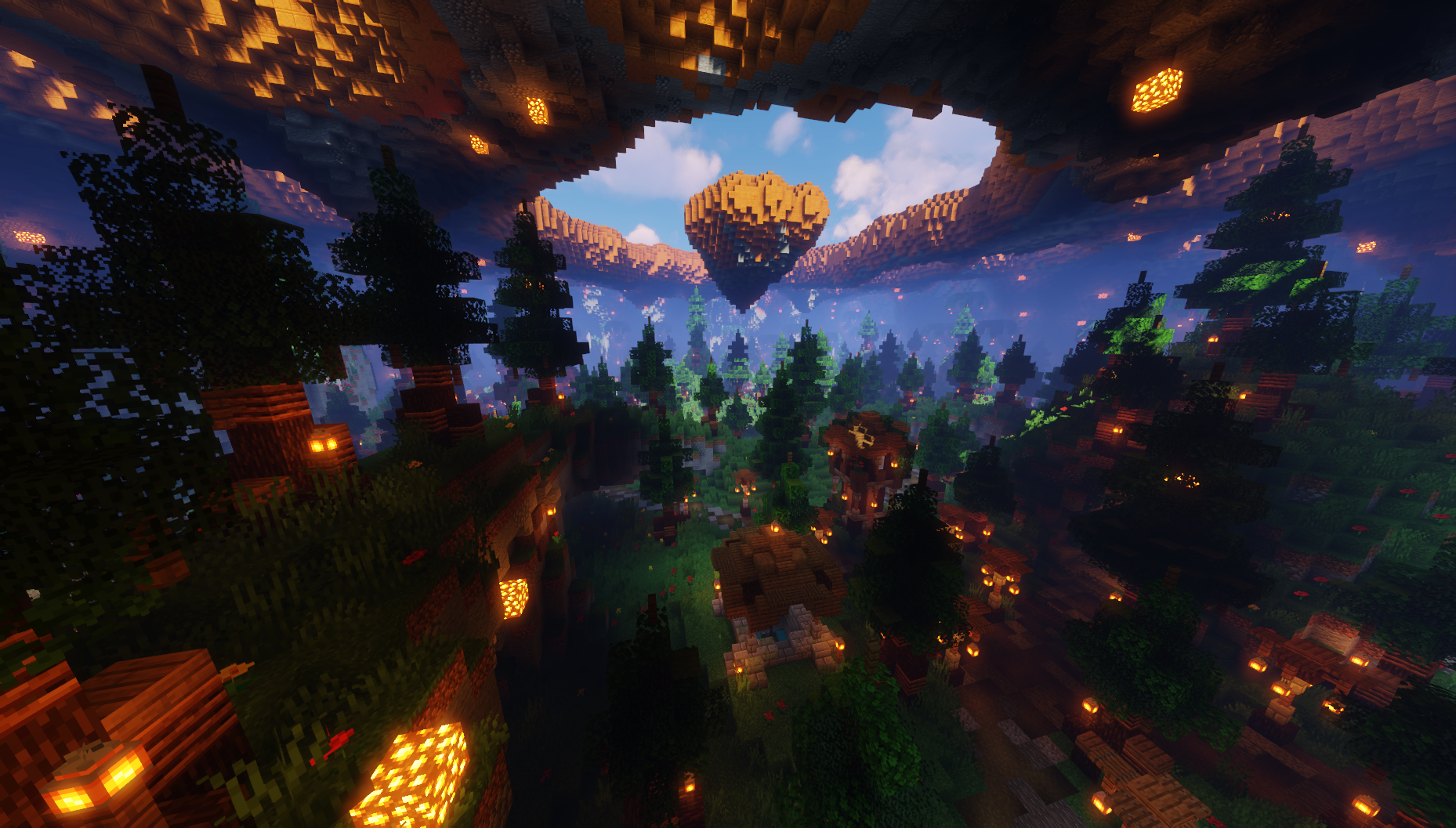 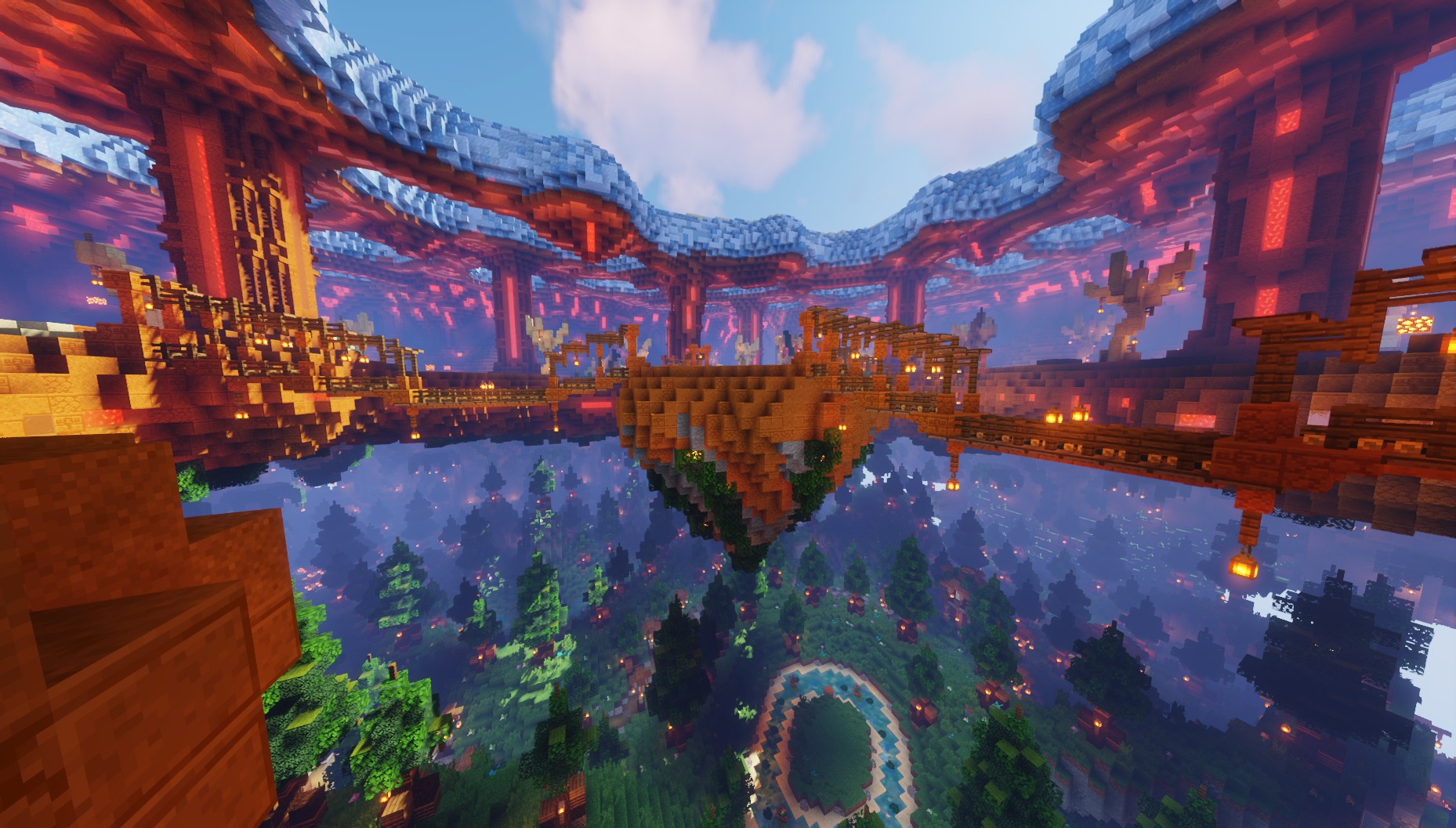 Hey all. We're 3 days away from the end of the group stage for Egghunt, and we've just had a player drop out last minute. Luckily, they had not completed any of their matches yet, so getting a sub for them for the matches will be very doable. Please DM me if you fit the following criteria:
a) You would like to participate in the Egghunt tournament this year.
b) You have not spectated/have done minimal spectating of egghunt matches. I may give small time handicaps to you (but not your partner) if you have spectated matches on arenas you need to play.
c) Your schedule is open enough that you are able to do 3 egghunt matches by the end of Sunday, April 4th. They will be a maximum of roughly an hour.
d) You are available to do said matches at times that will work with the partner you'll have (JonBimblesticks). He is in The EU, so if you are in NA or OC, you need to be available at times that will work for your EU partner. He is very free this entire weekend, so that won't be a concern.
e) You are open to and in acknowledgement of the fact that, if you do well enough, you may be obligated to continue doing matches past this weekend in the double elimination portion of the tournament.

If you fit all of these, please DM me ASAP, this will be first come first serve.
Speggtacular!

After many thousands of eggs found, and nearly 2 months of egg matches, we have reached the final showdown of the Tour D'Egg.

The final match, between the Scandalous, the reigning champions of Egg Hunt, who are as of yet undefeated in the sport of egg hunting, and The Wyrms, the challengers to the egg hunting crown, who weaved their way through many old houses, underwater caves and dense forests to get to the final showdown of the tournament, is at hand.

It will happen Sunday at 11am PDT / 2pm EDT / 7pm BST. Come spectate if you want to witness the most important match of competitive egg hunting in the history of the world.

Note that, due to some unavoidable scheduling possibilities, it may happen Monday instead, This is much less ideal for spectating purposes, but is a possibility. We will do our best to have the event happen on Sunday, though.
Last edited: May 6, 2021
Speggtacular!

The Tour d'Egg is complete! Congratulations to the winners, Snake_Crumble and 0l_, for pulling out a nailbiter of a win by a single egg. They are now The Grand Eggmirals. You can view the entire bracket here: https://challonge.com/tourdegg

Stats for the event:
Total Eggs Found Across All Matches: 16868

Best Performance on Hell2Heaven, Mufin's Stadium and Xero's Zoo (Arena 8):
6am bedtime pog, 149 eggs in 1h 51:47.734 (Note: the server was experiencing low TPS during this time, leading this match to be way longer than intended.)

A large thank you to everyone that participated! I hope all of you had a lot of fun.
Last edited: May 9, 2021
Speggtacular!
Show hidden low quality content