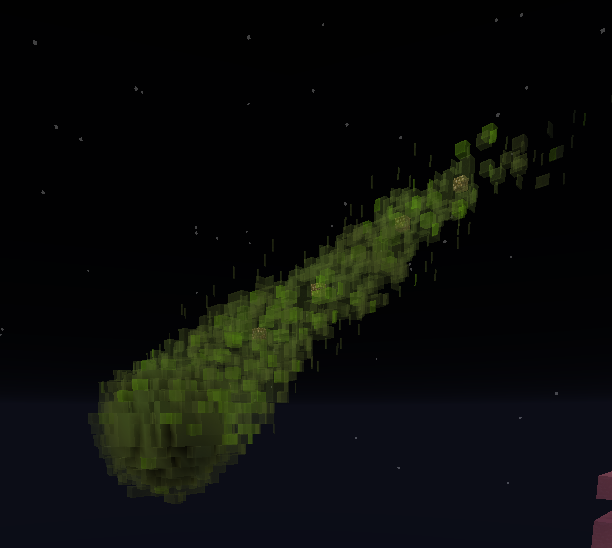 After a nerve racking 3 hours, with a surprise visit from the Green Comet, the Purple Comet event has concluded!

Despite rocky beginnings, Crimson got off to an early lead. Hex (Crimson) found a new secret collectible, the Green Star, very early on in Retrograde which game them a 3 point boost.

Crimson managed to hold on to this lead for the next two hours, but with less than half an hour to go, Amber managed to close the gap, equalise, then surpass them with 15 minutes by 1 point. Unfortunately, with about 7 minutes left Crimson retake their lead and retain it for the rest of the game, taking it out 73 - 71.

Special commendations:
thepookabear, who found the coin in The Great Race II but was on the wrong side.
yot_yot5, the independent superstar who got 5 points, and finding the impossible Green Star in PITMON
rebplane, for finding the Green Star at the end of Piston Parkour in Redstone Ready
The four people who ran straight past the purple coin in the FAQ quiz at the beginning when it was announced it had been fixed
Members of Team Amber who acted as decoys for Team Crimson who were hot on their tail in a tightly contested Sky Parkour search

Actually not that lucky

Thank you for hosting this amazing event!

Rarely in a pickle!

Aye, gg all and thanks rm and creepa!

and thank you ander for taking my coins

Fashionably several days late (as usual), the Purple Coins Event has well and truly concluded! All coins and stars have been collected in a record time. Here is a list of all the coins and who collected them, as well as who got the highest score.

There are no rewards for this, just bragging rights.

Remember that the scores as pronounced on the day are the final scores for the event, this is just a bonus side game : )

In other news, 3 more Gen1 coins have been discovered alongside the currently known one. They will be available for collection once we update to 1.13. We believe these are the only 4 remaining coins from Gen 1. All of Gen 2 have been collected.
Show hidden low quality content