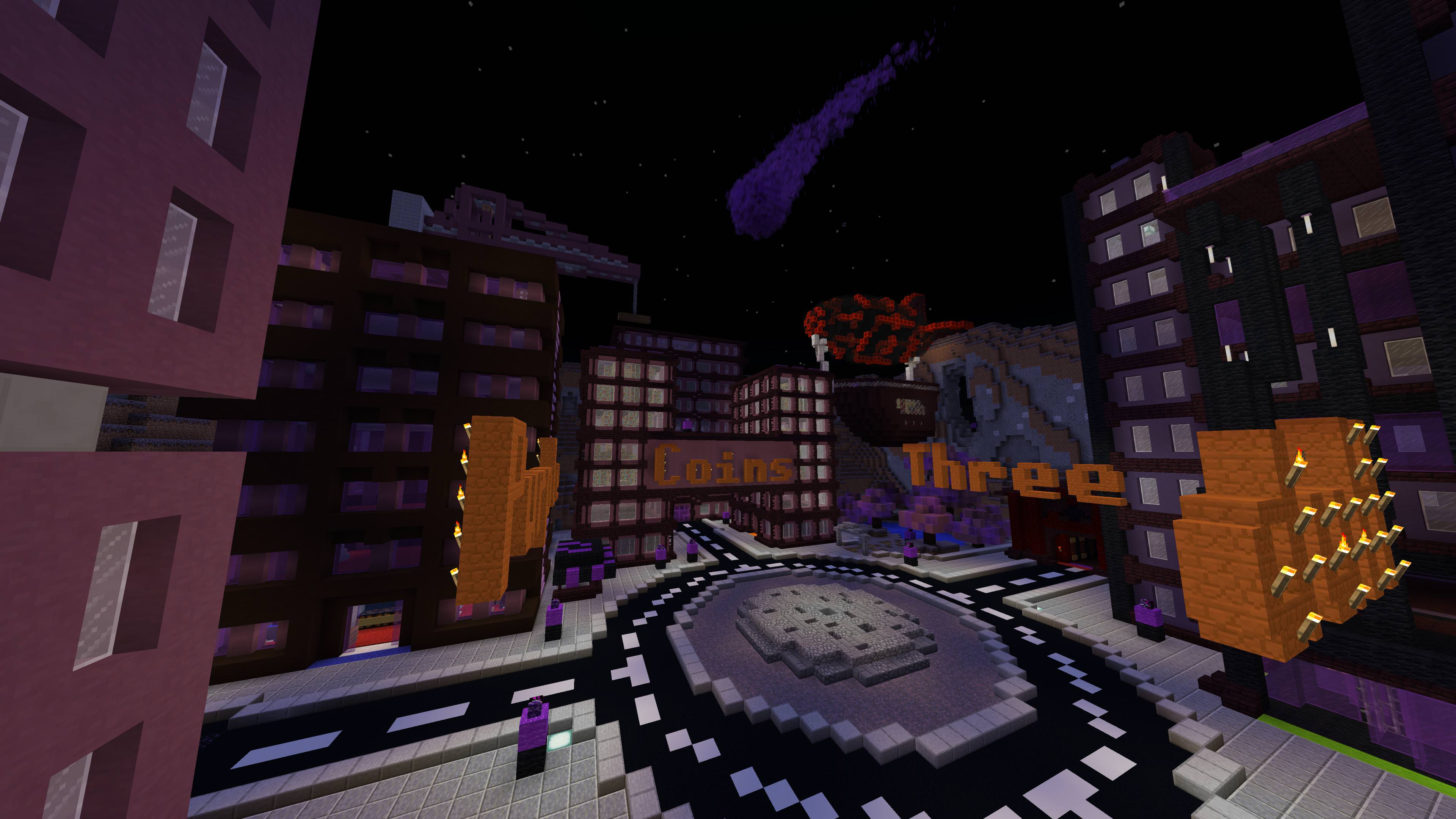 [!] PURPLE COMET IN ORBIT [!]​
Our sensors indicate that there is a prankster comet in orbit around Zero. Purple in colour, and corruptful in nature, the Purple Comet scatters "Purple Coins" across the galaxy. CometHQ (the ship) has indicated that spawn has been corrupted under the influence of the comet and is standing by to oversee the retrieval operation.


The Purple Comet is back, and with it more coins than ever before! Alongside a brand new hub, over two hundred coins have been hidden making this the largest it's ever been.

This time, Team Amber take on reigning champions Team Crimson in the bid to see who can collect as many coins as possible.

What is the Purple Comet Event?
As some backstory, this event was inspired by the so-called Purple Coin missions in Super Mario Galaxy. Active (and required) when a Purple Comet was in orbit of a galaxy, these missions were regarded as some of the hardest and most ruthless with strict time limits. If you want some idea to what it is like to collect purple coins, please see this and this.

Purple Comet/Coins is an event where hidden collectables known as Purple Coins are placed in every map in the FFA (and Spawn). Players are split into two Teams, Team Amber and Team Crimson and try to find as many coins as they can in three hours. Whoever gets the most wins. Once the event is over, the fun doesn't stop there! Purple Coins remain in maps until collected, meaning that players can still go hunt for the remaining coins. They stick around as long as they remain uncollected, to this date there are still live coins from Generation 1 in FFA maps. Purple Coins are purple heads with a white speck in the corner.

Where will I find Purple Coins?
A Purple Coin will be hidden in every map, with a few restrictions. Maps must be in the FFA(+) and have an assigned point value (so Ninja Warrior Training Course and Wool Town Retro don't count). Purple maps, such as ANHUR, DOOM-ED and Memories will only have one coin total, instead of one for each level. It doesn't matter when the maps were published, so World Domination and Canvas will have coins.

What about Carnivale?
Carnivale, and any subsidiary maps will NOT have Purple Coins placed in them. Don't waste your time looking for them. We still have something planned for Carnivale, which will be revealed on the day.

What are the rules?
No green-only commands may be used to find coins, such as /rocket, /call and /home. If you have permissions to the region of a map, don't abuse them to find coins. Please also be visible (not vanished) while searching for coins.

What if there is a tie?
In the (unlikely) event of a tie, several coins will be hidden in a location of our choosing. The team that finds the most of these special coins will win. There will probably not be a tie though, so you don't need to worry.

How this different from past events?
Not only are there more coins than ever before, we have also multiple surprises in store. Some have already been teased, but others you will discover on your own. If you were wondering:
(2016) Team Sonar defeats Team Nitron 26 - 13 in the first Purple Comet event (Thread)
(2017) In a very tight event, Team Crimson defeats Team Aurora 57 - 57 with a tiebreaker (Thread)

When is it? How long is it? How do I sign up?
The event will start at 7pm UTC and will last for 3 hours. Signing up in this thread is appreciated, but not required. All you need to do to enter is simply show up. Please show up early so we can start promptly.
What date you ask? September 8th (probably). Originally it was planned for September 1st, but a bunch of people are away that day. We are likely going to do September 8th instead. Please post below if you can make September 8th (or September 1st).

I should be able to make both dates, but Sep 1 would be better for me

Rarely in a pickle!

Can't make it sept 1, but sept 8 would make a turtle quite happy

I hope I can make it, dance starts sometime around then but I should be able to make it home before event starts
(both dates)
Last edited: Aug 25, 2018

I think I'll be able to do it on either day.

Actually not that lucky

Due to server consensus + recent rollback, the event will take place September 8th.

Super fun event! It was really close. Good job to all players on both teams, my heart was racing by the end.

Every time it is so close. Great job to both teams
Thanks for making it so fun, I loved the new additions.
Great hiding spots this time around too Already hyped for the next one.
Show hidden low quality content